Out of all the folks Iv’e had the pleasure of dealing with since this site began Simone Corday is one of my favorites. Simone came to know Hunter during his time at the O’Farrell Theatre, where at the time she was a stripper.

She is author of “9 1/2 Years Behind the Green Door, A Memoir: A Mitchell Brothers Stripper Remembers her Lover Artie Mitchell, Hunter S. Thompson, and the Killing that Rocked San Francisco.”

You can see my review of this book and my interview with Simone here. Simone is the one on the left in the picture with Hunter (Photo is by Michael Nichols.) Also the other picture is the cover of Simone’s book. To buy a copy click the cover image to be taken to her site. For the record, I cannot say enough good things about this book. It’s well written, out-there but believable, honest and open. And dont forget the Hunter S. Thompson factor. Here is Simone’s review of Wayne Ewing’s latest HST film Animals, Whores & Dialogue. Sincere thanks to Simone for taking the time to do this.

For anyone who was knocked out by seeing Wayne Ewing’s fine documentary Breakfast with Hunter, it’s a great gift to have Animals, Whores and Dialogue released. Excuse my momentary indulgence in Sex in the City images, but it’s like receiving that wedding band after relishing the solitaire, savoring the frosting after the cake. For someone who knew Hunter in the 80s, it’s touching to see him in the last years of his life, lovely to watch his triumphs at the 25th anniversary celebrations for Fear & Loathing, and to hear his fine-tuned political perspective, and listen to the power and elegance of his writing.

I’ve been reading the reviews and am thoroughly impressed. The reviewers cover the video with such alacrity I’m not sure what else I can add. So I will center on the arresting title, which we are told arose from the frequent metaphors the good doctor used in plying his craft. And in several scenes, the inscription “Animals, Whores, Dialogue, Electricity” is taped to Hunter’s typewriter, as he hovers over it wearing an eerie blue sportsman LED headlight strapped to his hat, honing in on just the right word.

“Animals”—we’ve all gotten a phenomenal laugh from Hunter’s mastery of animal metaphors. Often their presence is linked to mayhem, whether they are real animals or hallucinatory. In the DVD, there are shots around Owl Farm of peacocks flaunting their plumage or nesting at night, a sleeping kitten on Hunter’s couch near a glowing fire and his lively kitchen.

“Whores”—As a former stripper and a woman, I must say my ears pricked up when I heard “whores” in the title. But I took a thorough look, and could spy no obvious whores appearing in the DVD. There is one lively brunette who hoists her skirt to reveal a g-string with the Gonzo emblem outside the book signing for Hey Rube at the Aspen Institute, but that is the raciest moment. 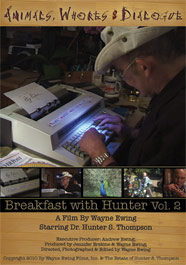 “Whores” was another common metaphor of Hunter’s–most often to condemn politicians, evangelists, unscrupulous media types. And I am veering away from the video in talking about this, but In Generation of Swine Hunter wrote: “Not much has changed with these powermongers since Caligula’s time. Sex and power have a long history of feeding on each other. In Hey Rube he says of Clinton and Bush: “They are both whores, because that is the nature of American politics.”

In Hey Rube alone, “whore” appears 16 times. There are vicious uses of the word in its traditional meaning: “two fat young whores from Oxnard,” “gold-plated whores from mysterious harems in Hong Kong, Turkey, and Liechtenstein.” One of the more disturbing uses of the word is in “We have become a Nazi monster in the eyes of the whole world – bullies and bastards who would rather kill than live peacefully. We are whores for power and oil with hate and fear in our hearts.” And other of the reflections and predictions in Hunter’s later writing are just as insightful and grim.

Please bear with me as I digress a bit more. When Hunter was honorary night manager of the Mitchell Brothers O’Farrell Theater where I met him, a legal case was going on when the place was under scrutiny by the police. At that time the theater had the wildest reputation, plus a mystique as a counter-cultural gathering place. Artistic expression in the shows was considered a defense for cannoodling in the audience—but flagrant whoring was risky. It was then that Hunter proclaimed Mitchell Brothers “the Carnegie Hall of public sex in America.” While writing his weekly columns for the San Francisco Examiner, Hunter traveled a lot, was a consultant to the Mitchells, and did research for a novel—but although intrigued by the sex business and curious, he remained wary. Some of his best pieces about it are in Generation of Swine. My impression of Hunter was that he was a romantic idealist, in the best sense. “Whores” and “pimps” are words he uses to show contempt.

After the lawsuit was settled in favor of Mitchell Brothers in the early 90s, word has it that the place has become more permissive. And I am oversimplifying, but in the 90s some strippers began to believe that they could have impact by organizing, and improve their situation at the clubs. This was at a time when many American strip clubs changed the employment status of their dancers to independent contractors and charged them escalating stage fees or quotas.

Meanwhile, whores, escorts and other sexworkers found their livelihood was endangered by political pressure in their communities, and some of them banded together as well.

Some of the women and men in different areas of the sex business began to feel they had more to identify with in one another than in the boundaries which defined their occupations, so they got together, shared experiences, and founded magazines like $pread, a quarterly published in New York. In her recent memoir about Portland, Magic Gardens, former stripper Viva Las Vegas explains, “As I saw it, we were all equally vulnerable as part of the invisible fringe, and when the powers at be picked on one of us, we all took a hit. We needed unity.”

Recently I attended a workshop with the savvy acclaimed author of the Belle de Jour book series, The Diary of a London Call Girl—lately made into a television series. Now retired from the profession, with a Ph.D. and a job as a forensic scientist, she turns the stereotype of whoring on its head.

Nowadays the words “whore” and “stripper” have taken on a broader range of meaning and acceptance. The weak economy plays a part, wide media exposure, and in some cities the Strippermobile packed with pole dancers traverses the streets late at night. One young woman attending the workshop explained she is founding Whore Magazine. “My grandmother doesn’t like the title–she asked me, Can’t you call it something else?” So there is still sensitivity about the word, along generational lines. And for many the word “whore” brings up the ugly practice of trafficking, and other forms of involuntary whoredom, which must rightly be condemned, along with pimps and procurers who prey on those in dire circumstances.

“Dialogue”—In the video we hear that Hunter began Fear and Loathing in Las Vegas with the dialogue, forgetting about the interior monologue that would make it difficult to film. We also hear and see how important friends like Oscar Acosta were to Hunter and how engaging in dialogue was part of his writing process. Along with his inner circle of friends from Aspen, the late George Plimpton, Warren Zevon, and Ed Bradley each appear and pay affectionate tribute.

Thank you, Mr. Ewing, for filming the real deal, the most expansive coverage of Hunter, the best commemoration of all.

–Simone Corday is the author of 9 ½ Years Behind the Green Door, A Memoir: A Mitchell Brothers Stripper Remembers her Lover Artie Mitchell, Hunter S. Thompson, and the Killing that Rocked San Francisco.

A long time fan of Hunter S. Thompson and long time book collector. Gentleman and a scholar. A pillar of society. A fine judge of wine and everything that ennobles the human struggle.